How to run a translation project smoothly

Interpretation is when a client needs something verbally explained in another language. Translation is when a client wants to turn a written document into another language. Usually, when a client comes to MMM for a translation work, MMM will firstly discuss the requirements with the client. For example, which languages do they want to translate into; whether the document full of technical terms; if they need back translation or independent checking; and if they want MMM to do the layout of a printed project. 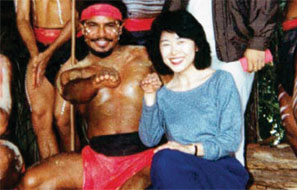 After the checking is done, the document will be passed on to our design department for design and layout. Most clients have a design for their English version and it is our job to comment about the cultural appropriateness of the original design and put the translated material into the provided template. However, some clients would like to have a new design for the translated material. In this case, MMM will start the design stage while the document is in the translation process. After the design is done, it will be passed onto the client for approval.

To illustrate this process, we will use one client’s case to illustrate how each step was done.

The overall project comprised three parts: checking and rewriting the Canberra Nara Sister City brochure, translating background information which appeared as wall texts in the exhibition and translating labels for each of the 50 works of art. The exhibition labels include basic facts about each work of art, such as the artist, the title, the date the print was made and the technique used, such as etching, screenprint, lithograph, etc.

From the outset MMM assigned a project manager to look after the whole project. This person was in regular contact with the client throughout the entire translation process. The project manager talked to the client about the overall aims and target audience, finding out who the main stakeholders were and the nature of the material to be translated. One of the key challenges was that Japanese scripts are not part of standard word processing packages, so the final texts were transmitted as PDF files to the designers and then to the publishers.

Communicating about the relationship in the brochure:

The first Canberra Nara Sister Cities brochure was originally printed in 2002. It was intended as a key marketing tool to communicate to people in both Japanese and English about Canberra’s Sister City relationship with Nara, Japan.

The MMM project manager briefed our Japanese consultant translator about the specific requirements for the translation. Particular consideration was given to the tone and consequent level of formality of the brochure. The Japanese language embodies elegant and complex cultural protocol, whereby respectful terminology and grammar are used both in conversation and in written texts.

After the translation was completed and before the brochure was reprinted, various stakeholders — including staff at the Nara Municipal Government and the Sister Cities Committee — were invited to comment on the revised brochure. As everybody was keen to get the best possible Japanese translation, this consultative process ensured not only that the facts were correct, but that the choice of words and the tone of the brochure text were consistent throughout.

The brochure was reprinted in time for 750 copies to be distributed at the art exhibition that was held in Nara in September 2006. The brochure text also provided the basis of some colourful promotional panels about the Sister City relationship which were incorporated into the exhibition along with a Canberra tourism promotion.

Communicating about diversity in the exhibition:

The Nara Municipal Government collaborated with the ACT Government to present the art exhibition at a central location in Nara. They anticipated that visitors to the exhibition would be of all ages and walks of life.

The exhibition curator wrote a few short essays about the significance of Canberra’s Studio One workshop where the prints in the exhibition originated. The curator also prepared an exhibition label for each of the 50 prints. Text on the various printmaking techniques, and a statement about the exhibition from the ACT Chief Minister and the Mayor of Nara, were going on display as well.

When all the English texts were written and approved, the client realised that there were specific terms of reference that made sense in English but were virtually impossible to translate into Japanese. Specific technical words in the exhibition labels and phrases and concepts expressed by the artist in the titles presented various challenges.

To avoid words being “lost in translation,” a preliminary step was taken whereby the exhibition curator, a native Japanese speaker, and the exhibition coordinator analysed the labels and discussed about how best to communicate the meaning of each. The team agreed that rather than simply translating the label, an extended label for some of the works of art would assist visual interpretation. The increased volume of words for translation was offset by the benefits of making a diverse range of cultural perspectives that were manifest in the exhibition more accessible to Japanese visitors.

MMM’s Japanese consultant translator had a specific interest in the visual arts, and rose to the challenge of the job. There were various issues that had to be clarified in the process of translating some of the texts, including standardising terms of reference and fine-tuning meanings. MMM’s project manager and the consultant translator worked swiftly to meet the client’s tight production deadline.

Over 2000 people visited the ACT Government’s first international exhibition held over twelve days in Nara in September 2006. Reports said that exhibition visitors were enthralled with the prints and enjoyed the opportunity to read in their own language about the arts in Canberra, and Australian art and culture.